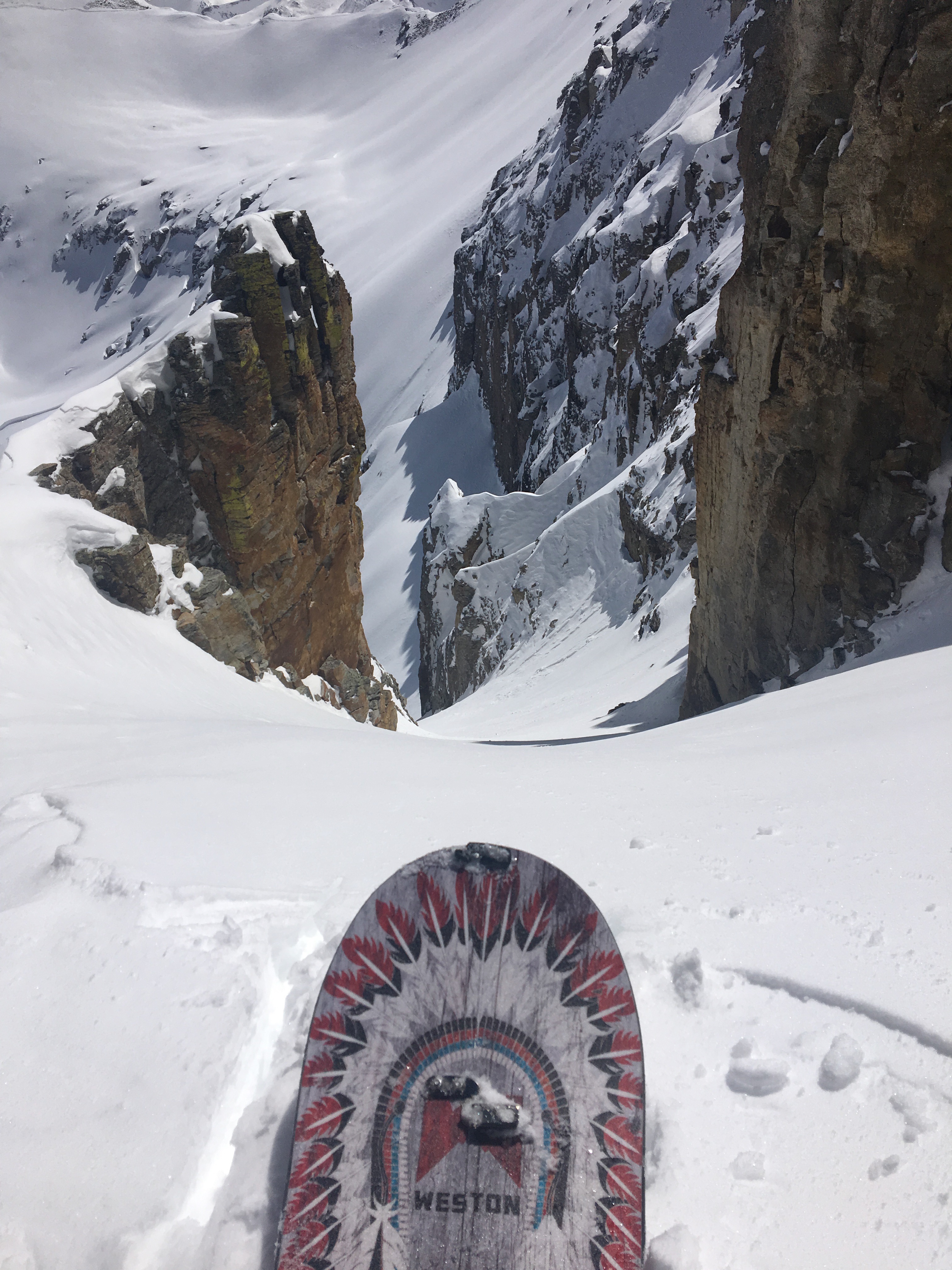 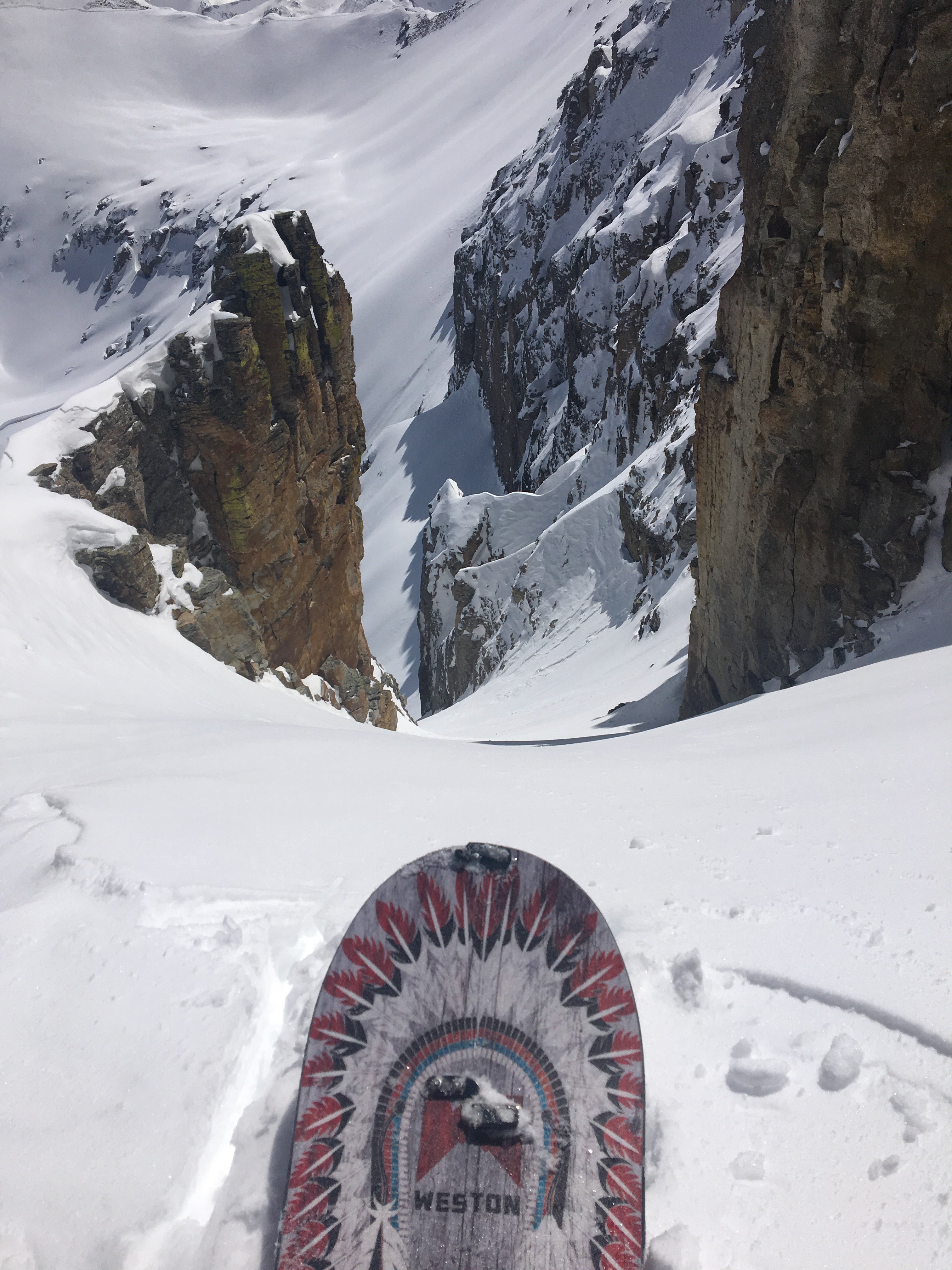 I woke up a little after 8 am, late as usual. It was closing day at Telluride Ski Resort and while everyone else was getting their costumes on I was still scrambling to find mine. After managing to grab everything I needed, I shoved it into my pack and ran my way the 2 blocks to the chairlift. I got a few funny looks as I loaded the lift, as most did showing up on closing day. When I got to the top of the lift, my partner was already there waiting for me, pointing at his watch.

As we rode down to the next lift we passed countless banana’s on snowboards, chickens on skis, and the always welcomed crew of females skiing the double black bumps dressed in the ever appropriate bikini. Once we unloaded the highest lift at over 12,000 feet, we departed to the right and began our hike. This is when the banana’s and the bikini’s started to dissipate. My closing day costume, along with my partner, was a splitboard, crampons, Ice Axe, Avalung, and backpack. Soon we were all alone on the ridge, and we dropped out of the access gate and into our long traverse around the Bear Creek Valley backcountry. Following his traverse track, I tried to take a higher line. I pushed and jumped on my track to see if I could get it to settle or move to indicate poor snow cohesion, a red flag for sure that avalanche conditions wouldn’t be ideal, but luckily everything seemed to be holding solid. 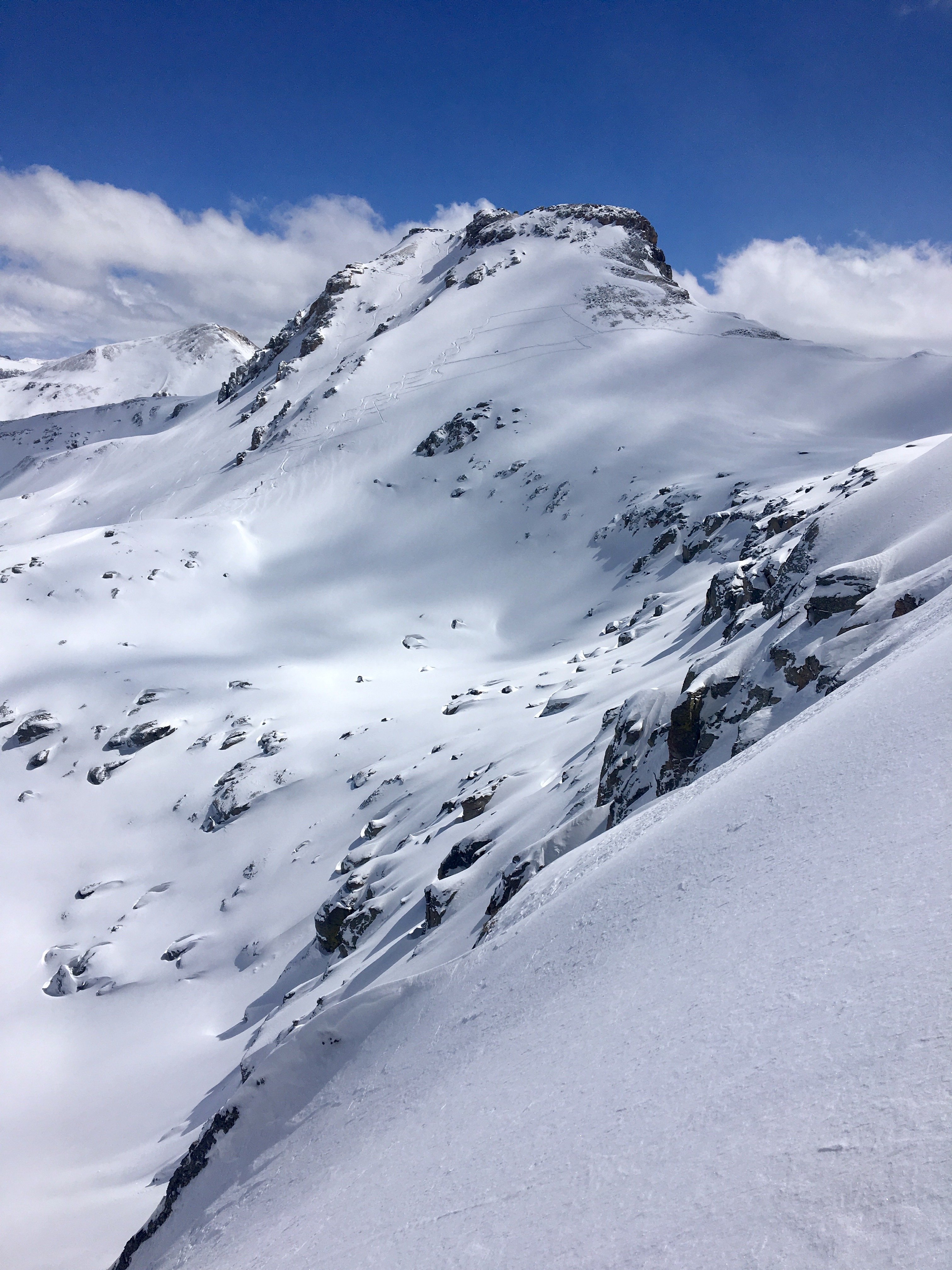 Once on the skin track, we made quick time. Our pace was quick and precise, we had no time to waste. During the spring the snow can warm incredibly quick under the strong southern Colorado sun and the longer we took the more danger we were in. Several hours later we found ourselves donning our crampons for our final push up the icy ridge. The banana’s and bikinis were nowhere in sight by this point as the festivities of closing day pushed on, far away from us. We were now completely isolated without another person in sight, alone at 13,359 feet and quickly switching our gear over to snowboard mode.

I popped my partner a quick grin as I finally felt it coming together. There was a lot of reluctance on our mission today. Closing day is always a weird day to go for something big and new, but it was a tradition for us at this point. Our own celebration to the end of another incredible season. And to top it off, we were now standing on a line that no skier or rider had ever touched. This would be the first descent. It was a sandbag of a line for sure because from where we were standing it looked like heaven. A hallway through the rock, filled to the brim with the freshest, driest, most luxurious powder known to man. But we had studied the line enough to know that it was a sandbag, and just around the corner was exposure large enough that a fall would result in a help-evacuation a best, and a body retrieval at worst. We knew that just around the corner was a pair of cliff bands, the first one probably around 30 feet with the second drop nearer to 60. We had determined that our safest exit through this zone would involve a lot of dangerous traversing in heavy avalanche terrain as well as billygoating through some very rocky sections. If when traversing, something ripped, we would both be swept off both bands of the cliff, likely to our death. If we made one wrong move picking our way through the billygoat section, a fall would most certainly result in a similar tumble right off the edge. 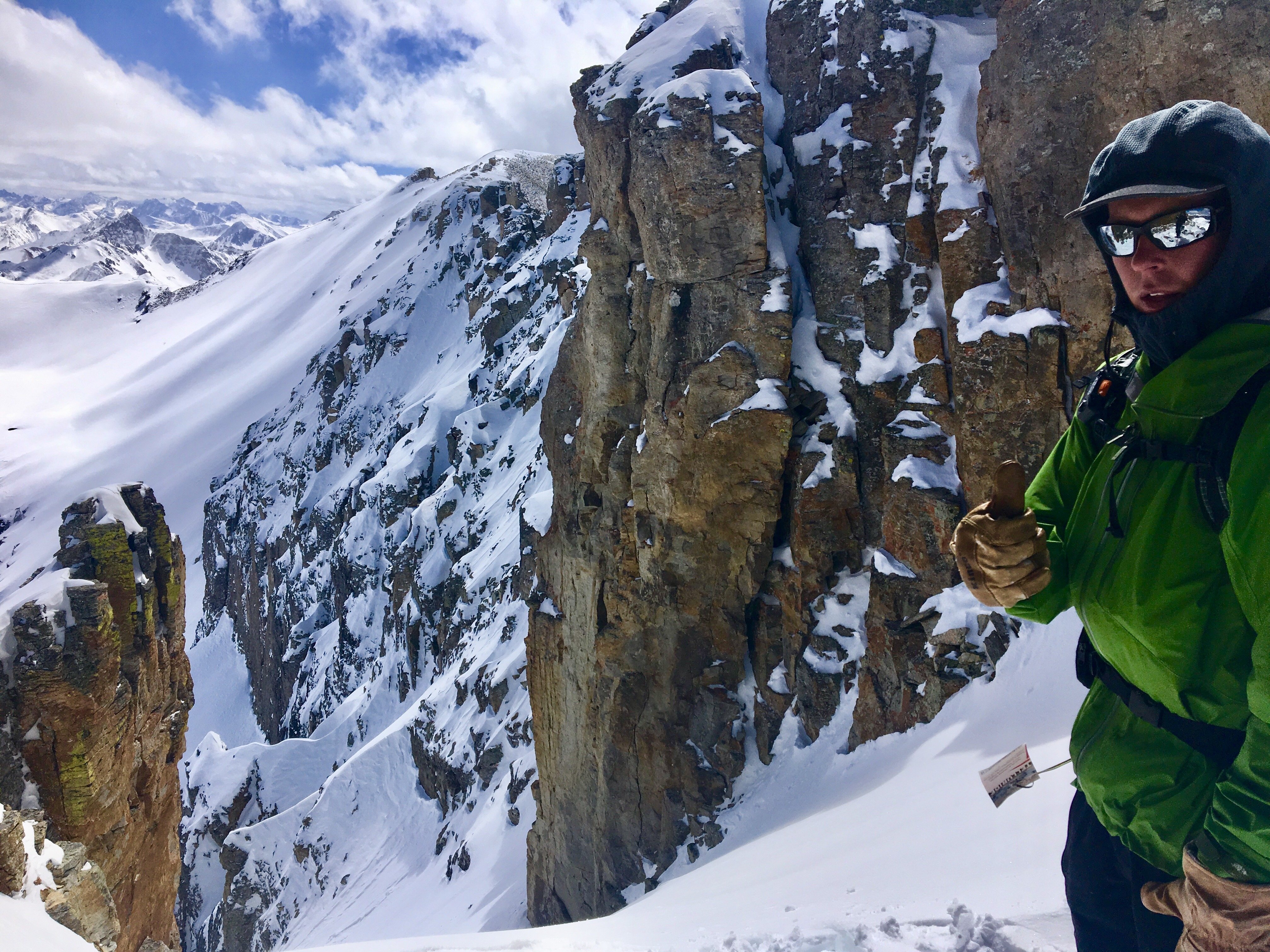 We played a good old game of rocks papers scissors to decide who gets first turns, and of course, my partner won. So strapped in, he slammed me a high five and dropped down into the rock hallway below. The snow looked great and after several turns, he flew through the choke and came to a safe stop out of the way of the chute so I could ride down to him and we could evaluate our next move together. 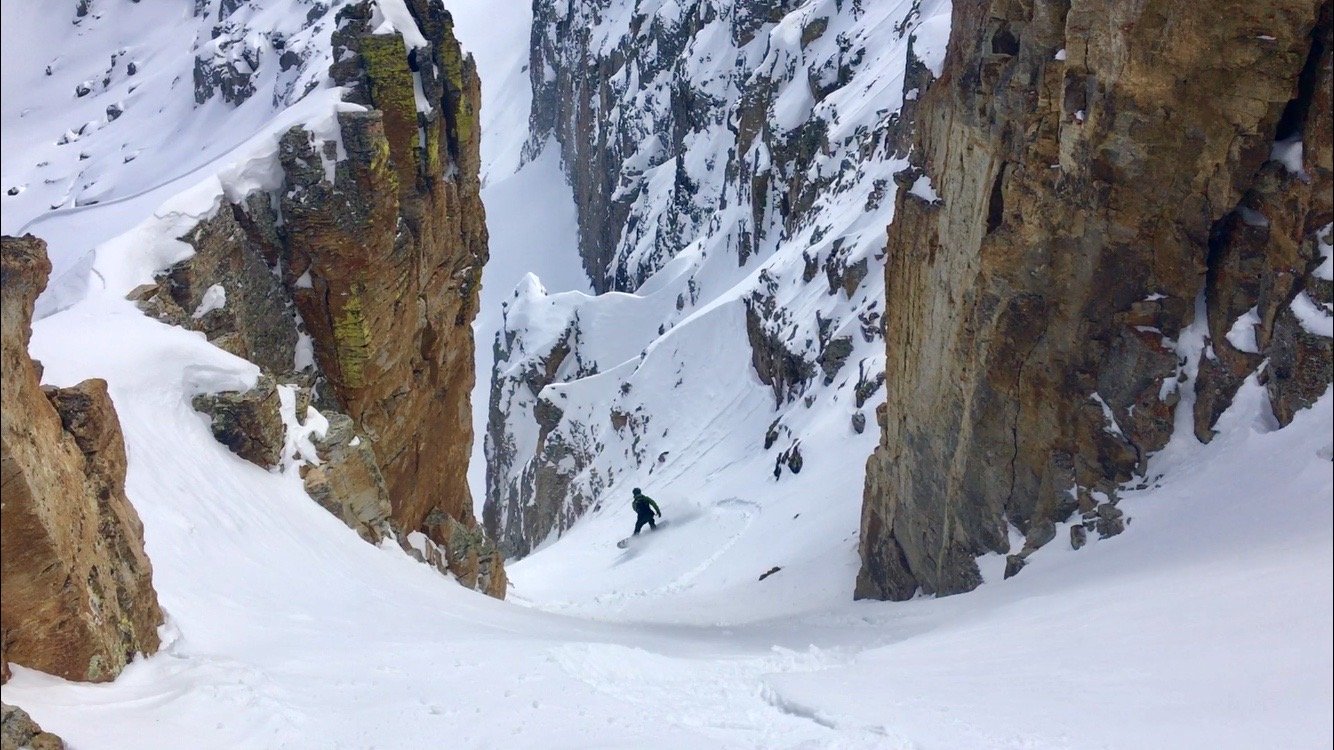 After riding down to him through the chute, my heart sunk. It was an incredible ride down and the snow was spectacular, but now we were standing over what looked like just massive cliff faces and no real way down. He suggested maybe we consider hiking back up, but I thought it was worth getting a closer look. On top of a cliff band, or any steep run really, it is nearly impossible to see what is below you. That’s part of the excitement. So I made several careful and deliberate turns down toward the first cliff band as that feeling of dread crept over my whole body. The feeling is best described as a feeling of blood rushing from your body. I don’t know where it goes, probably to my muscles, but it was rushing from my head and I started to feel dizzy as I tried to peer into the abyss below us. I yelled up to him,

“There might be a way we can goat our way through this section over here. It’s a little dicey and if we lose an edge we’re gonna go down, but there are decent handholds and enough of a platform of snow that maybe, just maybe we could work it.”

He followed down to me and we made our way through our first crux. Halfway through, my handhold broke off in my hand and I almost fell, but somehow kept my footing. Looking back, the width of my board put my heels almost over the 30-foot drop, and so I stayed on my toes and carefully crept along. Halfway through, we reached an impasse and had no choice but to drop down. Luckily by this point, the drop was only 15 feet, but how often do you drop a 15-foot cliff with no room for error? Any fall would send us careening off the next cliff, the 60-foot cliff was only 30 yards away. He said he didn’t like it, but at this point climbing back up would be more dangerous. If I spent any more time thinking about it I would freeze up with fear so when I felt the moment of confidence hit me I jumped. The landing wasn’t graceful, but I was okay. I’d have been ecstatic if I was home free, but I knew my partner still had to make the jump and we still had another cliff to navigate. I traversed out of his way as he jumped behind me.

We began to traverse back the other way, deciding to traverse as far as possible to see what options there were. To our amazement, the cliff began to shrink into something we could definitely manage. Careful not to let our confidence and excitement trick us into just heading right into it, we worked to keep our cool as we managed the next cliff band. We both picked our drops, sent it and make some arching turns down into the basin below. Laughing and hugging and eventually falling back into the snow, we looked back and marveled at our line.

I decided to call it Afterthoughts because going into it we had no idea what we would be getting ourselves into. Everything always looks different than it does when you’re riding it, and although we knew there were cliff bands to navigate below, the entrance looked alluring enough to fool any young and dumb snowboarder or skier into it. As we rode back down to town, we hopped on the lift and joined our friends in the traditional pond skim and plenty of beers. Another closing day for the books, I’d have to say. Until next year, Telluride! 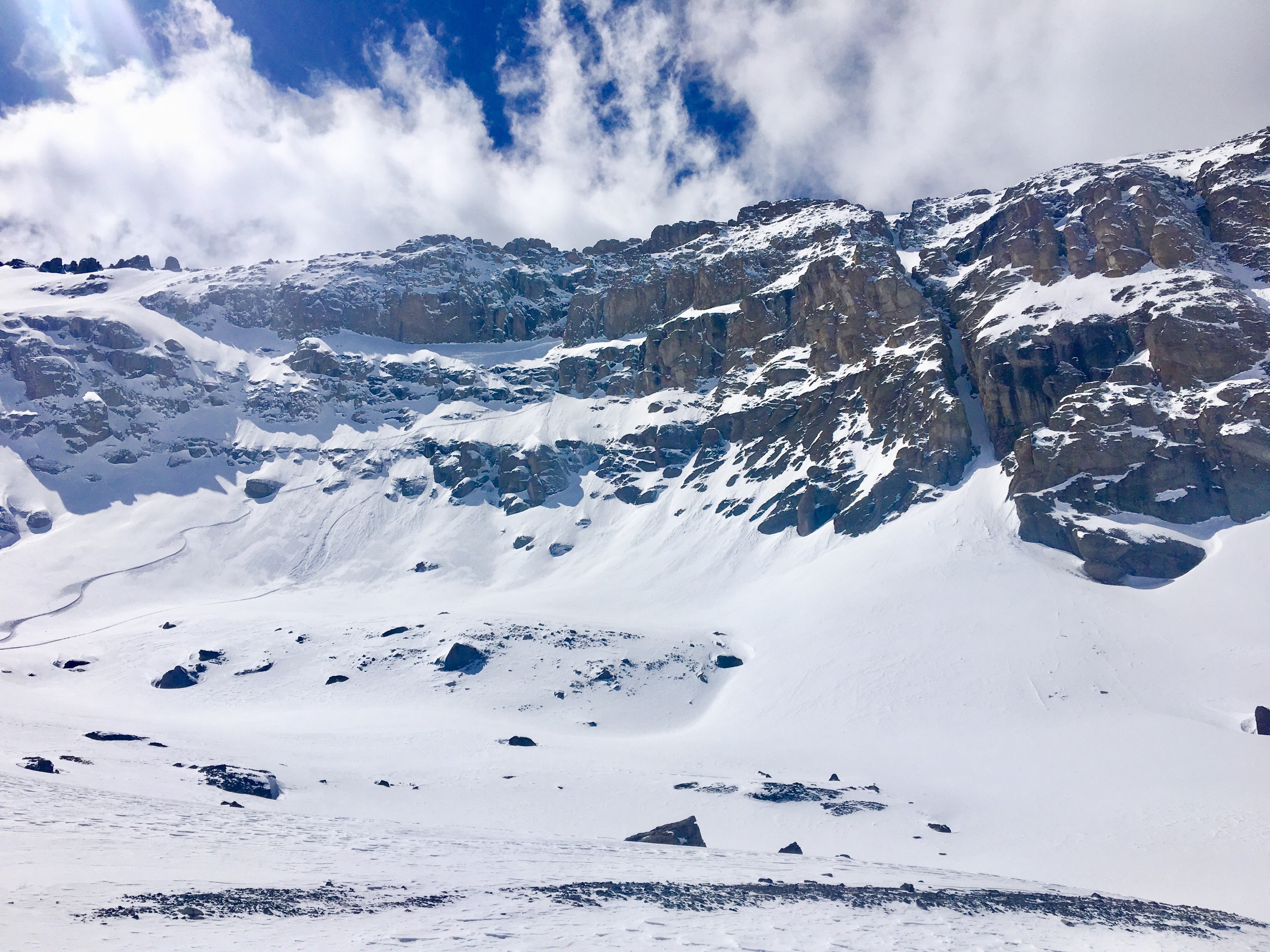