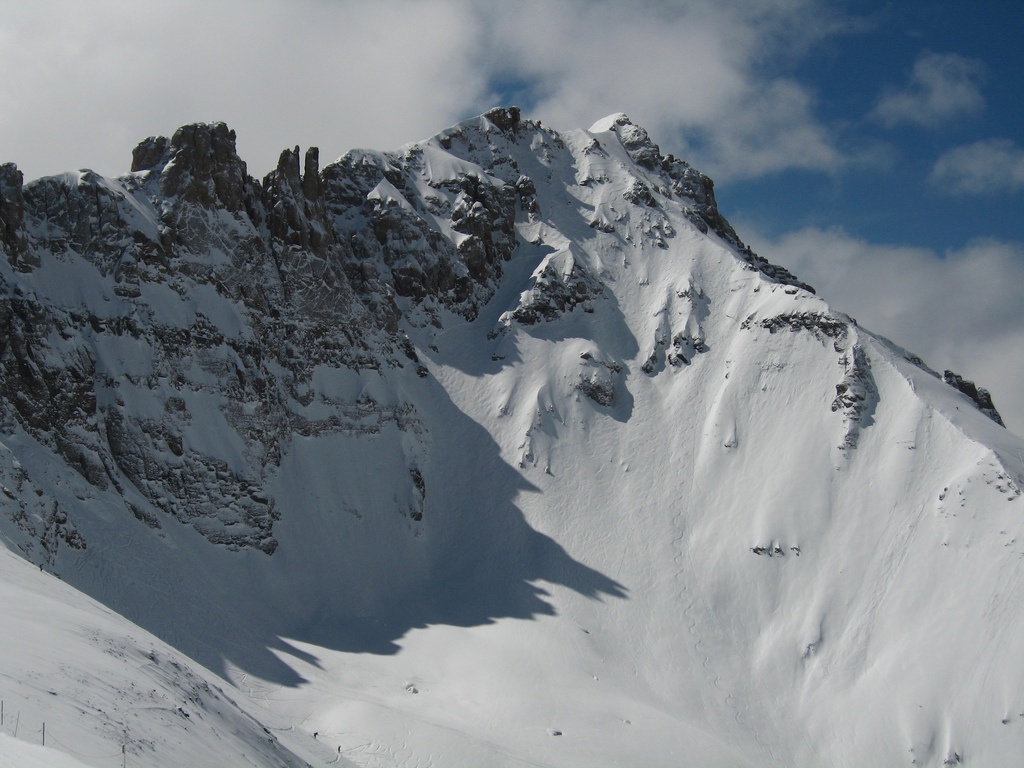 Debunking the Most Common Ski Myths

We've all heard the classics like "at what elevation do the deer turn into elk?" or "where do they keep the moguls during the summer?", but what about the more common myths for the everyday skier? What are the tricks that the locals know but don't share with the weekend warriors?

The most common myth I hear during the average day on the mountain is the whole "liquid courage" trick. If a friend or aquaintance is out skiing and having a hard time getting more comfortable, everyone in the group almost always recommends a quick break at the bar for some "liquid courage", which is really just a fancy way of saying that some alcohol will help them get over their fears and next thing you know they'll be pro! This just isn't true and one of the reasons it made the top of the list is because it is so frusturating for me! I've seen enough accidents to know, and ask any ski patroller their opinions on the subject if you want to hear all about why this is a terrible myth. If your balance isn't quite honed-in yet, there are a few surefire ways to make it worse. Next to being dehydrated, drinking is probably the worst. So don't do it. Even if you're already an expert, drinking never made anyone a better skier. Best case scenario, you'll be off-balance and get tired quicker. Worst case scenario? Expect an injury and a ride down to the base on the back of a ski-patroller's sled.

Another very popular myth that I see pretty much daily is the stretching myth. I am even victim to this, I'm just not convinced that the science is out on this one yet and plus after a good stretch I always feel fantastic. But static stretching has been shown not to be beneficial and may actually increase the risk of an injury. The reasoning behind this is that when a muscle is held in an elongated and stretched position for any period of time, it becomes slower to react when you need it to contract. Basically, stretching can slow down your muscles reaction-time. It is beneficial at the end of a hard day of skiing, while the muscles are still warm, but experts say it is much better to warm up your joints and muscles by working them through the range of motion they will see when you're out skiing. In other words, warm up on some easier green runs in the morning before going straight for the hardest run on the mountain. 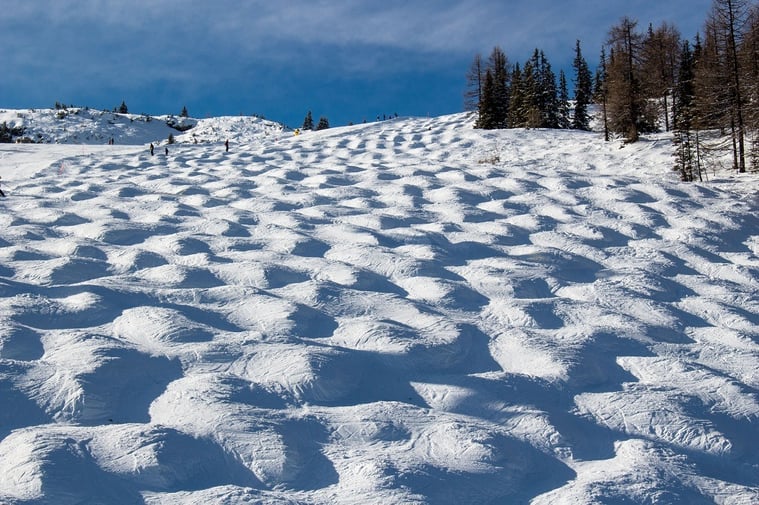 Another point of frusturation for me as I see acres and acres of beautiful bump-runs groomed flat across America is when skiers say they "can't ski moguls because it's too hard on my body" or worse when snowboarders say that "snowboarders just can't ride moguls, they're for skiers". Oh man I just want to scream sometimes, but instead I try to quietly remind myself that maybe they just aren't for everyone. When I have the energy I try and calmly explain firstly the concept behind bump skiing and then secondly how fun and even relaxing the moguls can be if you just apply the right form to the run.

Lets start with where the moguls come from, they come from dozens or hundreds of skiers over a period of time skiing the same run without any grooming. Naturally, the repeated turns on the snow will pile the snow into small and then larger bumps as more and more skiers travel through. So why does this matter? Well if you are practicing the right technique and using small, short turns through the mogul field, what used to feel like a war-zone will begin to open up into a beatiful ski run full of perfect pivot points for your turns and plenty of places to sideslip and scrub speed if you need to. It can become a quiet rhythm as you use each bump to steady control before dropping around and back into your next perfect turn.

Rather than slamming from bump to bump, you'll find yourself quietly counting and using the mogules as a sort of natural metronome to keep your turns equal and symmetrical. Let the bumps guide your line, but don't let them run your life. Not only that, but a shorter snowboard is actually much better equipped to handle the mogules with grace and fluidity than your average ski size.

Palmyra Peak, at 13,320 ft with over 2,500 ft of vertical skiing, puts Telluride at one of the highest elevations in America

The last one I'll cover is resort quality, because resorts love to cloud their reality behind numbers that are easily tampered with. It's pretty normal when I'm around friends comparing their favorite resorts to hear the same numbers come up again and again. "How many runs does it have? How many lifts do they have? How much snow does the mountain get per year? and whats the elevation of the highest lift?" These are often-times not an incredibly accurate way to describe the quality of a mountain because many of these numbers are very easily changed or modified to fit what the ski-resort wants to portray. Any run can be turned into two runs by changing the name from "World-class run" to "Upper World-class run" and "Lower World-class run" so don't let them fool you with that.

Another popular switch-up is how many chair lifts the resort has. Oftentimes they are also counting Tow-Bars as well as the Magic Carpet for beginners as lifts on their count, even though they aren't an official chairlift. A great example of this is when you compare Aspen to the much smaller Hyland ski and snowboard Area in Minnesota. Both boast eight chairlifts even though Aspen is nearly 20 times larger. To avoid these pitfalls, compare skiable acreage instead. Also, just because their chairs may run at an incredible elevation does not mean they have a large or quality resort. It is best to look at top-to-bottom elevation, what is the base lodge at and what is the highest chair dropping you off at? Or better yet, just look at the map or take a look at the resort using Google-Earth.

And the amount of snow a resort gets per year is just such a difficult one, there are just so many ways to look at this information. Not to mention that it's not about the year total, but how regularly the storms come in. Everyone loves a 5-foot deep powder day, but I can guarantee that it is loads more fun to get a fresh foot of snow every other a day for the next 10 days. Not only that, but I know so many resorts that keep their snow-measure in areas that commonly become wind-loaded with fresh snow as it swirls and piles higher than the rest of the mountain may show. Or they keep the marker in a North-facing area surrounded by trees so it never melts. How much snow falls and where is so arbitrary that it's best to just pay attention to the weather yourself and make your own decisions.