"I've often had a fantasy that one day, while cleaning out the barn or digging in the garden, I might uncover a diary or a pack of letters, some written message left from the past that neither time nor weather nor pack rats have carried away. Then I would learn what life was like for the woman who lived on this land a hundred years before me, a woman who was the wife of a rancher or a miner, somebody who believed a good life and untold riches were to be found in this valley tucked under the Continental Divide. Discovering Tomboy Bride was like finding that diary." - From the Foreword

The Town of Tomboy, located high above Telluride, is now nothing more than a Ghost Town. When the Ore ran out, so did the people.

Harriet Baccus was the wife of an assayer during the time of the mining boom. His job took them both to many far reaching places during the course of his career, but none she remembers as fondly as Telluride and the mining town of Tomboy, located in the avalanche-prone basins high above Telluride at 11,592 feet. Her story is a different one because it shoots the reader right into a day in the life; it almost feels as though they are reliving the tail through her eyes. Unlike many of the accounts that we have left of this lost time period where places like Telluride were first brought to the public's eye, hers is personal. It isn't a boring old map with details about the mines from a miner's one-dimensional perspective, Harriet talk as though she is talking to family about her experiences and it brings a larger than life outlook that isn't often found.

She tells stories of the snow storms and avalanches in vivid detail. One night the cabin was so cold and, as most cabins at this time were, very hastily constructed that it could not hold out the snow. Snow blew in through the windows and the door, snow blew in through the seams between the boards on the wall. Before long the snow was so high next to their bed that they might as well have been sleeping outside. They quickly gather their necessarys together before heading into the dark for a neighbors home, a neighbor who puts soup on the fire for them as they arrived, shaking off the cold and shivering until the sun came up the following day. As the storm worsened, the snow got so deep that at one point they had dug an actual 100-foot long tunnel from the cabin to the outhouse through the snow and ice. 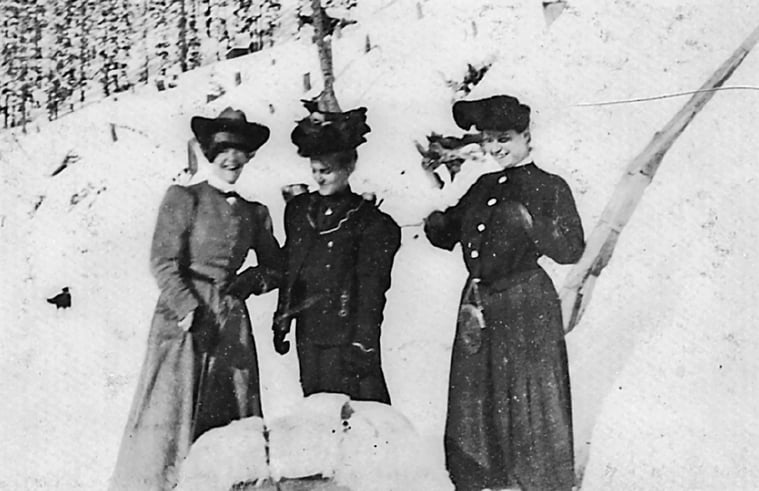 At 84, Harriet Baccus wrote and published the "Tomboy Bride", a first person memoir and up close look at her times as a woman in the crazy world of mining up above 11,000 feet in Telluride, which was recieved with high praise as one of the most unique books written about the time period to date. Harriet passed away not long after at the age of 92, in the town that she was born in, but her story lives on for all to read if they ever want a glimpse into the past.